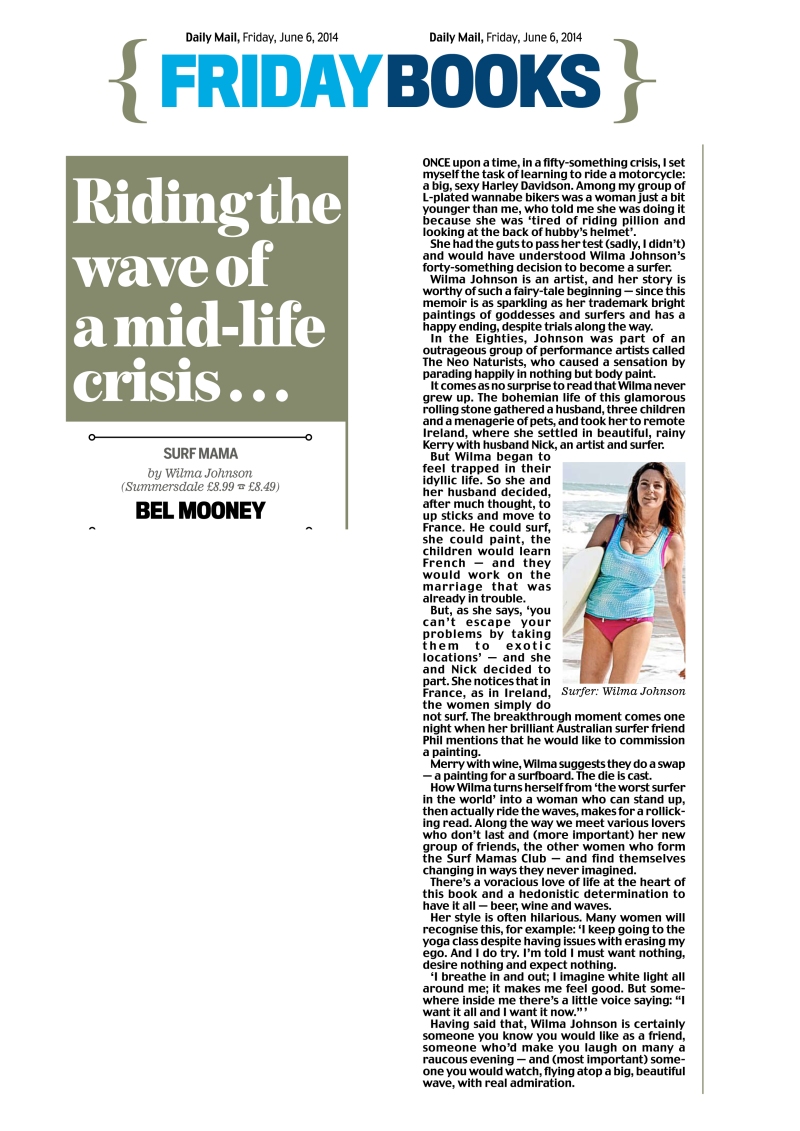 Riding the wave of a mid-life crisis…..

Once upon a time, in a fifty-something crisis, I set myself the task of learning to ride a motorcycle : a big sexy Harley Davidson. Among my group of L-plated wannabe bikers was a woman just a bit younger than me, who told me she was doing it because she was ‘tired of riding pillion and looking at the back of hubby’s helmet’.

She had the guts to pass her test (sadly, I didn’t) and would have understood Wilma Johnson’s forty something decision to become a surfer.

Wilma Johnson is an artist and her story is worthy of such a fairy-tale beginning – since this memoir is as sparkling as her trademark bright paintings of goddesses and surfers and has a happy ending, despite trials along the way.

In the Eighties, Johnson was part of an outrageous group of performance artists called The Neo Naturists, who caused a sensation by parading happily in nothing but body paint.

It comes as no surprise to read that Wilma never grew up. The bohemian life of this glamorous rolling stone gathered a husband, three children and a menagerie of pets and took her to remote Ireland, where she settled in beautiful rainy Kerry with husband Nick, an artist and surfer.

But Wilma began to feel trapped in their idyllic life. So she and her husband decided, after much thought, to up sticks and move to France. He could surf, she could paint, the children would learn French – and they would work on the marriage that was already in trouble.

But, as she says, ‘you can’t escape your problems by taking them to exotic locations’- and she and Nick decided to part. She notices that in France, as in ireland, the women simply do not surf. The breakthrough moment comes one night when her brilliant Australian surfer friend Phil mentions that he would like to commission a painting.

Merry with wine, Wilma suggests they do a swap – a painting for a surfboard. The die is cast.

How Wilma turns herself from ‘the worst surfer in the world’ into a woman who can stand up, then actually ride the waves, makes for a rollicking read. Along the way we meet various lovers who don’t last and (more important0 her new group of friends who form the Surf Mamas Club – and finding themselves changing in ways they never imagined.

There’s a voracious love of life at the heart of this book and a hedonistic determination to have it all – beer, wine and waves.

Her style is often hilarious. Many women will recognise this, for example: ‘I keep going to my yoga despite having issues with erasing my ego. And I do try. I’m told I must want nothing, desire nothing and expect nothing.

‘I breathe in and out ; I imagine white light all around me ; it make me feel good. But somewhere inside me there’s a little voice saying ; ‘I want it all and I want it now. ‘’

Having said that, Wilma Johnson is certainly someone you know you would like as a friend, someone who’d make you laugh on many a raucous evening- and (most important) someone you would watch, flying atop a big beautiful wave, with real admiration. 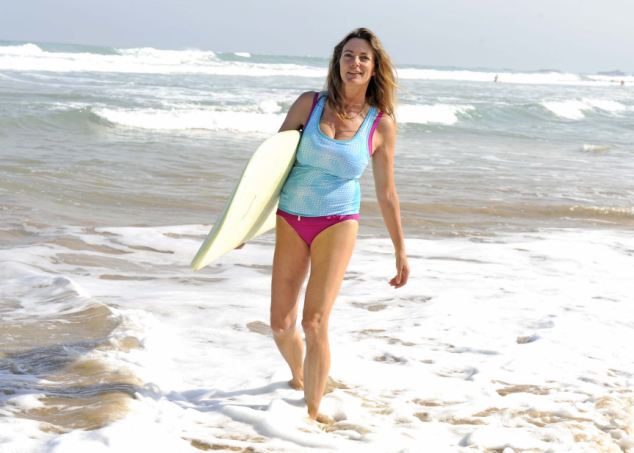